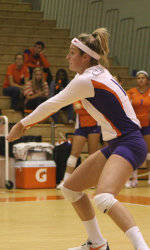 COLUMBIA, SC – The Clemson volleyball team improved to 3-0 in their spring finale against South Carolina at the Volleyball Competition Facility in Columbia, SC. The Tigers came back from a 13-10 fifth-set deficit to win the set, 18-16 and the match, 3-2 (24-26, 25-21, 20-25, 25-16, 18-16), in a match they never truly led until the final few points. Clemson fought off two match points in the victory. Kristin Faust had six of her 15 kills in the fifth set, each of which either tied the match or gave Clemson the lead. Serenat Yaz had 16 kills to lead Clemson, while Mo Simmons added 15 and 14 digs, and Alexa Rand and Sandra Adeleye had nine apiece. Rand led Clemson with four total blocks, while Simmons added three, including a solo and two block assists. Libero Natalie Patzin finished with 21 digs as well, while Yaz had 15. Clemson finished the spring with a 3-1 win over Furman in Greenville, a 3-2 win against Georgia in Clemson, and Wednesday’s 3-2 victory over the Gamecocks. The team will now take to the Mud Run in Greenville, SC this Sunday as a team-building exercise.