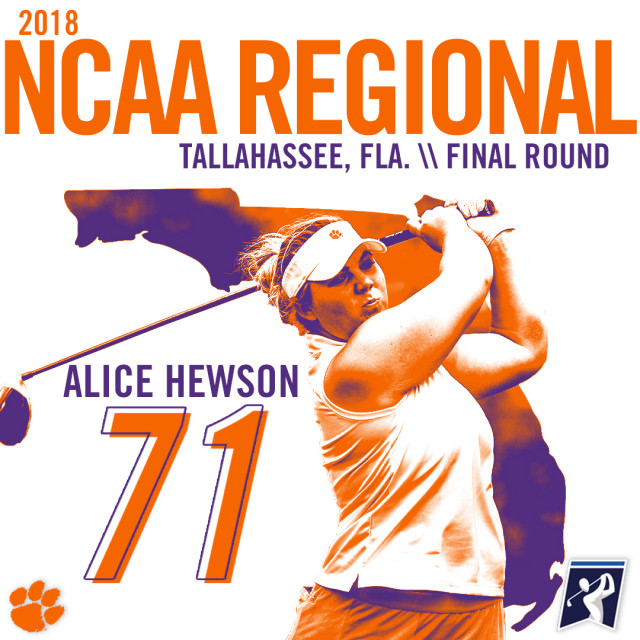 Clemson, S.C.—Wake Forest won a one-hole playoff by one shot over Clemson on Wednesday afternoon at the NCAA Tallahassee Regional to advance to the NCAA National Championship tournament in Stillwater, Okla. on May 18. It completed a wild back and forth day between the two ACC schools at the Don Veller Seminole Golf Course in Tallahassee, Fla.

There are four 18-team regional tournaments in the NCAA Women’s Golf Regional and the top six in each regional advance to the National Tournament. Clemson was in fifth place, 10 shots ahead of Wake Forest entering the third and final round. But the Demon Deacons, led by No. 1 player and regional champion Jennifer Kupcho got off to a blistering start and had a seven-shot advantage on Clemson with just two holes left.

But the 18th ranked Demon Deacons struggled down the stretch and played the final holes at seven-over-par. Clemson, ranked 29th entering the tournament, was three holes behind Wake Forest in terms of tee times. When senior Sydney Legacy made a 50-foot birdie putt on the 140-yard par three 17th hole, the score was tied at five under par apiece.

Legacy and Kennedy Swann both made par on the 18th hole and the two teams were off to a one-hole playoff. But, Wake Forest’s top four players played the par five 10th hole at one-under-par and Clemson’s best four played it at even, allowing Wake Forest to advance to the national tournament.

Alabama won the regional with an 831 score, 33-under-par, while host school Florida State was second at 839. Seventh-ranked Furman finished third at 846 and 10th ranked Arizona was fourth at 854. No. 15 Washington finished fifth at 854 while the Tigers and Wake Forest finished tied for sixth at 859, five-under-par.

Alice Hewson and Sydney Legacy were Clemson’s top players in the tournament and in the final round. They finished the 54 holes with identical scores of three-under-par 213, good enough for 16th place.  Hewson had three consecutive rounds of 71, and finished the season with a school record 15 under-par rounds. Legacy had scores of 71-69-73 for her three rounds and completed her senior year with six consecutive top 16 finishes.

Sophomore Kennedy Swann had a No. 25 finish with a 216 for the 54 holes, even par, after rounds of 71-70-75. It was her fourth top 25 finish of the year, including two in postseason play. Ana Paula Valdes finished 34th with a two-over-par 218, while Marisa Messana finished with a 76 on Wednesday and was 59th for the tournament at 225.

Note: Wake Forest one a one-hole playoff involving all five players by one shot.