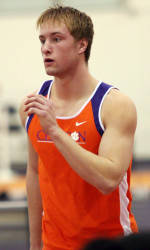 Atlanta, GA – Clemson had a pair of All-ACC performers in the decathlon and qualified several members for the finals of Saturday’s running events on day two at the ACC Outdoor Championships. The Tigers are fourth in the team standings with 37 points heading into the final day of competition. N.C. State leads with 53.5 points. North Carolina (48) is second and Florida State (38) is third.

Miller Moss and Mike Feathers both earned their first-ever all-conference accolade in the multi-events, while Travis Padgett set a new standard in the 100m dash at the conference meet. Padgett breezed through the qualifying round of the 100m dash with a time of 10.21, which established an ACC Championships meet record. He had easily the best time, and will be joined by three teammates in Saturday’s final (2:30 PM).

Two-sport star C.J. Spiller, also a star on the gridiron, returned to action after three weeks of spring football practice to post a 10.59. Freshman Trenton Guy (10.66) will be the fourth member of Clemson’s team competing Saturday in the 100m final.

Padgett continued his momentum into the 200m dash, where he posted a regional-qualifying time of 20.97 in winning the third heat. Corey Brown and Cowin Mills also qualified for Saturday’s final and posted times fast enough to qualify for the ever-important East Region Championships in May. The field for the NCAA Outdoor Championships is determined by regional meet performances. Brown (21.15) and Mills (21.16) posted season-bests in the event as well.

Brown and Mills also advanced to Saturday’s final in the quarter mile by virtue of strong performances in the prelims Friday. Brown won the second heat with an outstanding, personal best time of 47.05. His time surpassed the regional standard, one of two qualifying times posted by Brown on Friday. Mills ran a season-best 47.33, the fourth-best time in the prelims.

In the steeplechase, Matt Hughes displayed a glimpse of how he was a Canadian junior champion in the event before arriving at Clemson. The freshman posted a regional-qualifying time of 9:04.10 and finished sixth in his first-ever collegiate steeplechase competition.

The first decathlon event Friday was the 110m hurdles, and Feathers used the event to his advantage. He posted a personal best time of 15.07 against a slight head wind, while Moss clocked a 15.68. Feathers’ time was best in the field. He followed with a solid mark of 120’7″ in the discus. Moss had a personal best in the event, recording a throw of 118’8″.

The pole vault proved to be a turning point in the decathlon. Tyler Clarke of Duke, leading the competition after day one and through seven events on Friday, did not clear his opening height. Moss cleared just 13’3.5″ in the vault, while third-place David Lewis (Virginia) moved to the front after an outstanding mark of 15’11”.

In the javelin, Feathers made a move to jump inside the top three. He had a throw of 157’8″, easily best of the day. Moss had a throw of 147’10”, but Lewis was only one foot behind in terms of his javelin distance. The 1500m, the final event, was won by Lewis who claimed the overall decathlon with 7,105 points. Moss tallied 6,991 for his runner-up finish, which was also an NCAA provisional qualifying point total. Moss’ time in the 1500m was a personal best 4:37.19. Moss’ second-place finish was his first All-ACC honor as a Tiger. Feathers placed third, also earning all-conference recognition for the first time. He totaled 6,582 points.

Scott Pauga finished ninth in the high jump with a clearance of 6’5″. He cleared his opening height on the first attempt, but came up short on three tries at 6’7″. Alex Padgett had a mark of 51’5″ in the shot put and placed 12th overall.

George Fields had the best outing of his junior season by far Friday. After finishing eighth in the long jump indoors, he improved to fourth overall this week after hitting a season-best mark of 24’9.75″ on his last attempt. The distance matches his personal best, which he first achieved at the 2007 ACC outdoor meet in College Park, MD. Josh Fowler was ninth after a personal best jump of 22’9.75″.

The meet concludes Saturday with the finals of all running events, as well as the 4x100m and 4x400m relays. Also competing on the final day for the Tigers will be one of the nation’s elite pole vaulters, Mitch Greeley. The action can be followed on www.flashresults.com and a recap of the day’s action can be viewed on ACC Select.