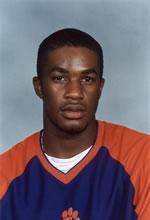 Clemson Men’s Track And Field To Compete At Penn Relays

CLEMSON, SC – The Clemson men’s track and field team will compete at the Penn Relays this weekend in Philadelphia, PA. The Tigers will begin competition at the 111th annual event on Friday, concluding competition on Saturday. This year, during over the 33 hours of competition over the three days of the meet, more than 425 races will be run, an average of more than one race every five minutes. The Tigers runners will compete in three of those races, including the 110m hurdles, 400m hurdles, and shuttle hurdle relay. Also competing in the field events, Clemson will have representatives in the long jump, discus, hammer, high jump and triple jump.

On Friday, Michael Bolling, Scott Kautz, Rashad Gardner and Roy Cheney will open competition for the Tigers in the 400m hurdles. The shuttle hurdle relay team, comprised of Cheney, Gardner, Ryan Koontz and Lydell Perry will take to the track next, followed by Cheney and Perry in the 110m hurdles. George Kitchens, who is coming off his ACC Championship in the long jump, is slated to compete in that event, and Derek Gilson will compete in the discus throw on Friday afternoon.

The meet continues for the Tigers on Saturday with finals of the 110m hurdles. Danny Alge will compete in the hammer throw, Adam Linkenauger will represent Clemson in the high jump and Jason Bell is scheduled to compete in the triple jump on Satuday afternoon.