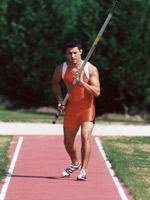 Itay Magidi won the 3000m steeplechase with a time of 9:06.13, qualifying for the regional championships. The Tigers’ 4x100m relay team also qualified for the region meet, posting a time of 40.35. Ryan Lewis qualified for the East Region Championships in the pole vault, clearing 16’0.75″. That mark was good for a second-place finish. Matt Lombardi placed fifth in the shot put, posting a personal-best mark of 53’11” to qualify for the region meet. Clemson’s 4x200m relay team was also a winner on Saturday, claiming the race in 1:23.87.

The Clemson men’s track and field team will return to action next Saturday, Apr. 5, at the Clemson Invitational.