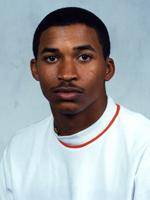 CLEMSON, S.C. – The Clemson men’s track and field team qualified an individual and a relay team for the 2003 East Region Championships at the Clemson Relays on Saturday. George Kitchens qualified in the long jump, while the 4x100m relay team of Ronald Richards, Grafton Ifill, Robert Ibeh and Warren Eure recorded a time of 40.67 to qualify.

George Kitchens and Chris Gross led the Tigers in the field events. Kitchens qualified for the East Region Championships in the long jump with his winning mark of 24’2.5″. Derek Gilson placed seventh (147’0″). Gilson also competed in the shot put, recording a fifth-place finish with a mark of 52’4.75″. Gilson and Lombardi were eighth and ninth in the hammer with marks of 153’0″ and 151’11”, respectively.

Clemson men’s track and field returns to action on Mar. 28-29 at the Raleigh Relays.