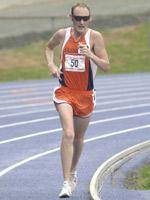 CLEMSON, S.C. – The Clemson men’s track and field team won the 2003 Clemson Invitational held at the Rock Norman Track Complex on Saturday. The Tigers tallied 236 points to win the meet, followed by Iowa State’s 142 points. Appalachian State recorded 80.5 points to take third, while Charlotte was fourth with 66.5 points and East Carolina finished fifth (45 points). The Tigers won 12 events and qualified 11 student-athletes as well as the 4x100m and 4x400m relay teams for the East Region Championships.

In the field events, Ryan Hunter won the event with his clearance of 16’0.75″, while Andrew Kessler cleared 15’7″ to place third, and Derek Gilson placed second with his throw of 50’5.5″, and Matt Lombardi finished third with his mark of 48’5.5″. Gilson also led the Tigers in the discus throw, finishing as the runner-up with a mark of 160’10”, while Rick Hill placed fifth with a mark of 133’4″. Lombardi scored for the Tigers in the hammer throw with a season-best mark of 152’5″, and Hunter placed sixth in the javelin with a throw of 134’7″.

The Tiger track and field team returns to action on Apr. 12 at the Sea Ray Relays and NC-SC All-Star Challenge.