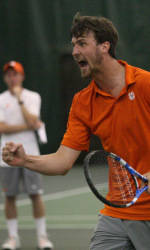 CLEMSON, SC – The Clemson Men’s Tennis team will play host to its final two home matches this weekend against Virginia and Virginia Tech. The Tigers face the fourth- ranked Virginia Cavaliers on Friday at 2:30 pm before facing the 63-ranked Virginia Tech Hokies on Saturday at 3:00 pm.

Yannick Maden leads the Tigers in single wins this year. He is 23-8 for singles over the season.

Wes Moran will be honored on Senior Day during the Virginia Tech match. Moran has been named to the ACC Academic Honor Roll three times during his career while majoring in marketing. Over the course of his career, Moran has won 36 singles matches and 30 doubles contests.

This will be the 61st meeting between Clemson and Virginia on the tennis courts. The Tigers lead the overall series 41-19 since the first meeting in 1955.

Clemson and Virginia Tech have met 15 times on the tennis courts in the series with the first ever match occurring in 1969. The Tigers lead the overall series 8-6.