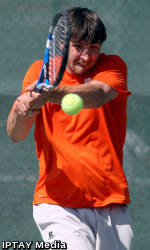 Clemson has an 8-8 record overall and a 4-1 mark in the Atlantic Coast Conference. The Tigers are ranked 64th in the latest ITA poll. Yannick Maden leads the Tigers in singles wins with a 23-6 record overall. He is also 12-3 in dual matches and has been Clemson’s starter at number-one singles this season.

Duke is ranked sixth nationally and North Carolina is ranked 24th according to the latest ITA poll.

This will be the 74th meeting between the Tigers and North Carolina in men’s tennis. The Tar Heels lead the overall series 47-26. The two teams first met on March 30, 1931.