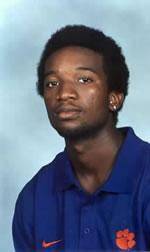 Clemson, SC — The Clemson Men’s Tennis team has been ranked No. 66 according to the latest Intercollegiate Tennis Association National Poll released on Tuesday morning. The Tigers will return to action on Wednesday afternoon when they play host to 37th-ranked Wake Forest at Hoke Sloan Tennis Center at 4 p.m.

Clemson is currently 19-10 on the season, and 3-4 in the Atlantic Coast Conference. The Tigers are currently riding a three-match winning streak, including a victory over arch-rival and 56th-ranked South Carolina last week, and ACC wins over No. 29 Florida State and North Carolina State. Clemson is led by its top doubles team of Nathan Thompson and Jarmaine Jenkins, ranked 32nd in the nation in the latest ITA poll. In singles action, the Tigers have four players with at least 15 dual match wins this season. Leading the way is senior Ryan Young at 17-8, having won his last three matches.

Clemson is under the leadership of head coach Chuck Kriese in his 29th season. Kriese holds a 584-366 record, and is ranked as the sixth-winningest active coach in NCAA Division I. The two-time National Coach-of-the-Year has led the Tigers to 20 NCAA Tournament appearances.

Wake Forest enters the match with a 10-8 record overall, and 2-4 in the ACC. The Demon Deacons are currently ranked No. 37 in the current ITA poll. Wake Forest is led by Derrick Spice who is ranked 51st in the nation in singles action and Andrew Hamar who holds a No. 117 ranking. Last week, Wake Forest fell to No. 18 North Carolina 6-1, before defeating future ACC foe Miami 6-1.

Wednesday’s match will mark the 55th meeting between the two teams, with Clemson holding a 39-15 advantage in the all-time series. The Tigers are 20-6 in matches played in Clemson. Last season, Clemson fell to Wake Forest by a score of 5-2 in a match played in Winston-Salem.