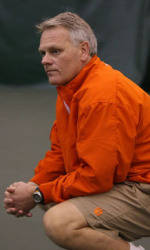 CLEMSON, SC – The Clemson men¹s tennis team will play host to ACC rival Georgia Tech on Wednesday, March 4, at the Hoke Sloan Tennis center on the Tigers’ campus. Match time is set for 2:30 p.m. Live scoring for the match will be available on www.clemsontigers.com.

Clemson is now 6-4 on the year and 0-1 in the ACC. The Tigers have won three of their last four matches. Georgia Tech is now 4-4 this season, and this will be the ACC opener for the Yellow Jackets.

When Clemson meets Georgia Tech on Wednesday, it will mark the 49th meeting between the two schools. Clemson leads the overall series, 26-22. The series started in 1925. In the last 10 matches, the series is tied 5-5.