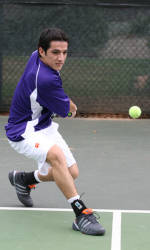 Clemson will continue its home stand as the Tigers will play its first ACC home match of the season on Wednesday, March 4 as Georgia Tech comes to the Hoke Sloan Tennis center for a 2:30 p.m. meeting.

Statistically, Clemson is led by Carlos Alvarez as he has a 5-3 record in dual matches. He has posted a 3-1 record at number one singles this season. In doubles, the team of Rok Bizjak and Gera Boryachinskiy has won five matches this season.