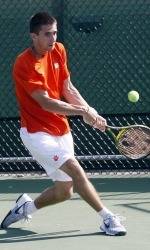 CLEMSON, SC – The Clemson men’s tennis team will open the 2012 season on Sunday as the Tigers will play host to the College of Charleston at the Indoor Tennis Courts at the Hoke Sloan Tennis Center on the Tigers’ campus.

Head Coach Chuck McCuen will be entering his fourth season as Head Coach of the Tigers. He has won 43 matches in his previous three years at Clemson. McCuen will be welcoming four starters back from the 2011 team that finished 15-12 overall. Sophomore Dominique Maden led the Tigers for most singles victories with a 16-10 record in 2011.

The Tigers have won their season opener nine years straight or since the 2002 season. Currently, the Tigers are ranked 66th as a team in the latest ITA rankings. Junior Yannick Maden, a brother of Dominique, is ranked 59th in the latest ITA singles rankings.

This will also be the season opener for the Cougars. Last season, the College of Charleston finished with a 17-6 record overall, and a 9-1 mark in Southern Conference play.

A match with the Citadel was previously scheduled for the afternoon of January 15, but it was cancelled and will not be made up this season.