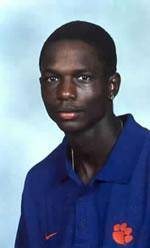 Clemson picked up the doubles point with wins at the numbers one and three slots. At the top position, Clemson’s duo of Nathan Thompson and Jarmaine Jenkins upset the third-ranked tandem of Ludovic Walter and Jason Zimmermann, 8-5. The Tigers secured the point when Ryan Young and Brett Twente downed Stephen Amritraj and Peter Rodrigues at number three, 8-5.

Duke then won five straight singles matches for the victory. After Jonathan Stokke’s straight set win over Young at number five tied the match at 1-1, Phillip King gave the Blue Devils a 2-1 advantage with a 6-1, 7-5 victory over Thompson at the top position. Walter then downed Jenkins, 6-2, 6-1, for a 3-1 lead and Zimmermann followed with the clinching triumph, a 6-1, 6-3 win over Ash Misquith.

Clemson falls to 16-10 overall this season, 1-4 in ACC action. The Tigers return to action on Wednesday when they play host to in-state rival South Carolina in a One Clemson, Solid Orange event.