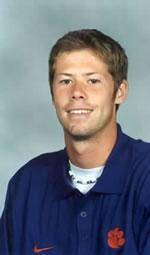 Raleigh, NC — The Clemson Men’s Tennis Team earned a hard fought 4-3 decision over North Carolina State on Sunday afternoon in grueling outdoor conditions. The Tigers are now 19-10 on the season and improve to 3-4 in the Atlantic Coast Conference.

The match began with Clemson earning the doubles point, taking two of three matches from the Wolfpack. Nathan Thompson and Jarmaine Jenkins were able to get past Jon Davis and Will Shaw at number one doubles 8-6. Clemson secured the doubles point as Damiisa Robinson defeated Andre Iriarte and Conor Taylor 8-6 at the number two position. Brett Twente and Ryan Young suffered their first loss of the season as they fell to Val Banada and William Noblitt 8-5 at number three doubles.

Clemson improves to 19-10 on the season, 3-4 in the ACC. The Tigers return to action on Wednesday as they play host to Wake Forest at 2 p.m. at the Hoke Sloan Tennis center.