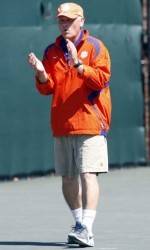 CLEMSON, SC– Gerardo Meza will be joining the Clemson Men’s Tennis Team for their Spring season starting in January as announced by Head Coach Chuck McCuen. Meza was one of Mexico’s top junior tennis players and had a very successful junior career competing on the ITF world circuit.

“Being ranked #63 in the world in junior tennis is not an easy task. This shows a great deal of hard work, dedication, and solid coaching, as you have to consistently compete against the best players in the world,” said McCuen. During his junior career Meza played Junior Davis Cup for Mexico twice where he again competed against some of the best junior players in the world. Meza was also a member of Mexico’s Davis Cup team in February 2010 against Guatemala. “Playing Davis Cup for my country was very special for me. I enjoyed the team atmosphere, and it was very exciting,” said Meza.

Meza trained at the Guizar Tennis Academy (GTA) in Orlando, FL during his junior career.

“Coach Boetsch and I have always been impressed with the players and coaches from GTA. There work ethic, passion, and knowledge for the game is second to none,” said McCuen. “GTA has developed many top collegiate and professional players.”

“I want to thank Nicolas Guizar, Jacobo Hernandez, Sorin Cherebetiu, and Luis Mario very much for all their hard work and teachings,” said Meza. “The players and coaching staff at GTA are like my family. I am very thankful for the experiences I had there. I learned from the good experiences and the mistakes I made there, and I am a better person because of this. The coaches and staff there taught us how to train hard, have discipline in our lives, and be more responsible. They showed us how to be good people on and off the court, and were always there for us no matter what. I wish all the players and everyone at GTA the best. I look forward to continuing my education, and being a part of the team at Clemson. I want to improve in all aspects of my game to become a professional tennis player. While at Clemson I hope to continue to grow as a person, student, and athlete,” said Meza

“I am very excited about the success Coach Boetsch is having with recruiting. He is playing an essential part in bringing the best possible players to Clemson, and there are more to come. Clemson Men’s Tennis is on the rise,” said McCuen.