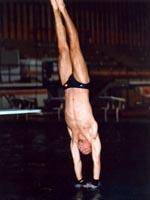 CLEMSON, SC – The Clemson men’s swimming and diving team will travel to Chapel Hill, NC to compete in the 2003 ACC Championships on Feb. 27-Mar. 1. The meet will be held at the Koury Natatorium on North Carolina’s campus. Each day, the preliminary rounds will begin at 11:00 a.m. followed by the finals at 7:00 p.m.

Clemson has a 7-4 record in dual meets and is 3-2 in the ACC. During the regular season, Craig Thomas led the Tigers in the diving events, winning either the one or three-meter competition seven times throughout the season. Mark Henly and Buddy Reed paced Clemson in the backstroke and IM, winning five events each. Rob Kummer led the Tigers in the butterfly with three event wins, while Brent Hitchcock posted three wins in freestyle events.

Clemson is trying to improve on its fifth-place finish at the 2002 ACC Championships. At last year’s meet, Craig Thomas finished in third place in the three-meter diving competition.