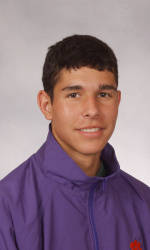 Clemson was led by sophomore Jim Wahl recorded a personal-record performance to place eighth. Wahl’s time of 25:21 is a 17-second improvement over his previous personal-best effort. Ryan Fenton clocked a 25:40 and Sean Reilly completed the race in 25:58.

Head Coach Bob Pollock said, “I am very pleased with the results, especially since we competed without a full team. The first three guys (Clark, Wyatt, Wahl) ran very well. We have three weeks off to prepare for the Pre-NCAA meet, which is an extremely important meet for us, as it will help us assess where we are in terms of our team goal of winning the regional and advancing as a team to the national championships.”

Clemson will return to the course on Saturday, Oct. 16 in Terre Haute, IN, for the Pre-NCAA Championships meet.