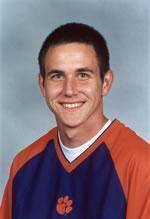 BOONE, NC – The Clemson men’s cross country team opened its 2004 season with a second-place finish at the Covered Bridge Open hosted by Appalachian State University. The Tigers were led by Derrick Wyatt, who finished fourth overall. All six Tigers who competed on Friday completed the race in the top 20 of the 93 competitors.

The Tigers return to the course on Saturday, Sept. 18 as they play host to the Clemson Invitational.