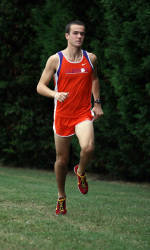 Clemson, SC – The men’s cross country team will travel to Louisville, KY for the NCAA Southeast Region Championships this weekend. The top two teams from the region earn automatic berths into the NCAA Championships on November 19. Clemson finished fifth at the 2006 meet, which was also held in Louisville.

The meet this weekend will cover 10,000 meters and will once again be held at E.P. “Tom” Sawyer Park. The event is scheduled to get underway at 11:00 AM.

Clemson’s best finish at the Southeast Regionals was in 2004, when Itay Magidi finished runner-up to lead the Tigers to a third-place team finish. The Tiger program has had plenty of individual success at the NCAA Regional level as well. Jason Meany was individual champion of the 2002 meet, while Scott Shaw was runner-up the following season.

Eight student-athletes will make the trip this weekend, and seven are allowed to compete. Bryce Iverson, an All-Region harrier last season, is battling through an injury and his status for this weekend remains unknown.

Matt Clark did not compete at regionals last season due to injury, but he was the Tigers’ top finisher in 2005 with a sixth-place individual finish. He ran a personal best 10K time of 30:12.7 at regionals that year. Clark earned All-ACC honors for the second time in his cross country career two weeks ago in Charlottesville, VA. He was eighth in the conference race.

Sam Bryfczynski has been a solid #2 runner for Bob Pollock’s team this season. He has made improvements in his time and finishing positions from his sophomore season of 2006. He recently placed 23rd at ACCs with a time of 24:55.1. His top 8K time this year was 24:40 at Pre-Nationals, where he finished 102nd in a strong field.

Matt Bruce was one of the top freshman performers at the ACC Championships two weeks ago. He finished 28th overall with a time of 25:03.7. His best effort this year was also at the Pre-NCAA Championships, where he had a time of 24:49 at the 8000m course.

Iverson finished 31st at the ACC Championships two weeks ago. His best time this season was also at Pre-Nationals, where he ran a 24:43 and was 109th overall. He injured an ankle in practice the week after ACCs.

Jonathan Sunde scored for the Tigers at the conference meet with a 44th-place finish. He had a time of 25:44.7, a personal best effort on an 8K course. He posted top-10 finishes earlier in the season at Western Carolina.

Will Noble, Brian Soder, and Chad Holt will also make the trip this weekend.