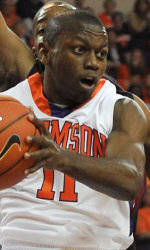 QUICK FACTS  Clemson and College of Charleston will square off Saturday for the first time since 1925. It will be the ninth meeting in the history of the series, with the Tigers holding a 7-1 advantage over the Cougars.

 The Tigers won their 12th straight non-conference road game against East Carolina on Dec. 16. Clemson won 80-63 behind double-doubles from Trevor Booker and Tanner Smith. Clemson’s 12-game road win streak over non-conference foes is the longest in the ACC.

 The Cougars enter Saturday’s tilt with a 5-3 overall record, having won their first three Southern Conference games of the season. After dropping three of the first four games, College of Charleston comes into Littlejohn Coliseum riding a four-game win streak.

 Clemson Head Coach Oliver Purnell is tied for 22nd on the all-time victory list among ACC coaches. He has 126 total wins and tied the late Skip Prosser (Wake Forest) for 22nd on the list with the win over ECU.

 College of Charleston Head Coach Bobby Cremins is quite familiar with the Tiger program, having played Clemson on a yearly basis from 1982-2000 with Georgia Tech. Cremins is 19-22 all-time in games against the Tigers.

 This will be just the 13th game against an ACC school in program history for College of Charleston. The Cougars have compiled a respectable 4-8 record, with wins over Maryland, Georgia Tech and North Carolina (2).

 The Tigers were credited with 25 assists in the win at East Carolina. It was the most assists by Clemson in a road game since the Tigers collected 26 at Minnesota for the ACC/Big Ten Challenge on Nov. 29, 2006.

 Following an 0-for-11 three-point shooting performance against Furman on Dec. 13, the Tigers rebounded by hitting 10-for-24 from long range against East Carolina on Dec. 16. It was the third time this season Clemson made 10 or more triples in a game.

 Trevor Booker was just one assist shy of a triple-double against East Carolina. The senior had 13 points, 12 rebounds and a career-high nine assists. It would have been just the fifth triple-double in school history.

 Booker leads all active ACC players in rebounds (896) and blocked shots (216). He ranks 20th in ACC history in blocks. He is also the conference’s active leader with 28 career double-doubles, including five this season.

 Tanner Smith has produced two double-doubles in the last three games. He now ranks second on the Tiger squad with 4.6 rebounds per game from his shooting guard position.

 Devin Booker leads Clemson in field goal accuracy, hitting 61 percent of his attempts this season. He has averaged 10 points per game over the last two contests.

 Andre Young is coming off a career-high 16-point outing at East Carolina. For the second time this season and third time in his career, he knocked down four shots from three-point distance. He also knocked down four against Butler earlier this year, and at Georgia Tech last season.