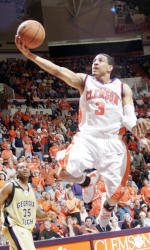 The Clemson men’s basketball team will play host to Appalachian State on Friday night at Littlejohn Coliseum in Clemson. The tipoff between the Tigers and Mountaineers will be at 7:30 pm. The game will be broadcast live on the Internet via ACC Select and can be viewed by selecting the link below.

The Tiger men’s and women’s basketball teams are holding a season long $10,000 shooting contest. The Solid Orange Fan of the game will also be chosen to compete for $50,000 at the end of the year. Show your Solid Orange Pride and bring out all your friends to vote so that you can have a chance to win the grand prize.

GAME NOTES  Oliver Purnell will look for his 50th victory at Clemson when the Tigers take on Appalachian State on Friday evening at Littlejohn Coliseum.

 Clemson has a 8-1 record all-time against the Mountaineers, but this will be the first meeting since the 2001-02 season when Larry Shyatt’s Tigers were victorious, 76-66. Chris Hobbs scored 20 points to lead the Tigers in scoring, while Ray Hendrson had a double double with 16 points and 10 rebounds. Clemson had justa 34-33 lead at halftime.

 Clemson has played four games, while Appalachian State has played just one. The Mountaineers scored 60 points in their first half of the season and went on to a 109-71 victory over North Greenville on November 13. Kellen Brand was their top scorer off the bench with 19 points in just 18 minutes. Point Guard D.J. Thompson had 18 points, seven rebounds, six assists and six steals in 22 minutes .

 Clemson has continued its balance of a year ago. The 2005-06 Tigers had four players average in double figures with the top scorer, Shawan Robinson averaging 12.3 points per game. So far this year, James Mays is the top scorer with a 12.8 average, one of three Tigers in double figures. However, two others are between 9.3 and 9.8 points per game.

 Senior Guard Vernon Hamilton needs one rebound and 10 assists to each the 300 mark for his career. Hamilton now has 207 career steals to rank 25th in ACC history. He is already the Clemson career leader.

 James Mays was the MVP of the Cox Communications Classic, the three-game series of games that opened the season, November 10-12. It marked the second straight year Clemson had a tournament MVP during the regular season. Last year Vernon Hamilton was the MVP of the San Juan Shootout.

 Freshman center Trevor Booker is shooting 64.3 percnt from the foul line so far and is the team’s second leading rebounder at 6.3 per game.