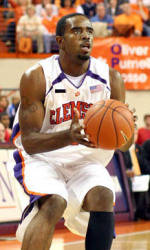  Cliff Hammonds had his streak of 44 straight games with a made three-point goal snapped in the 93-80 loss at Duke. He needs five steals to become the sixth player in ACC history with at least 1200 points, 400 rebounds, 400 assists and 200 steals.

 This is Clemson’s third straight game vs. an ACC team from the state of North Carolina. Clemson beat NC State last Tuesday and lost at Duke last Saturday. Clemson still has to travel to North Carolina and N.C. State in February.

 Trevor Booker had another solid game at Duke with 15 points and 10 rebounds, his sixth double-double of the season, and third in the last five games. Over the last six games, Booker has made 48 of 74 shots from the field for 65 percent. He has scored 20.2 ponts per outing during that time span.

 Clemson’s streak of nine consecutive weeks in the top 25 of both polls ended this week. That nine-week streak tied for the third longest in Clemson history.

 Clemson freshman point guard Demontez Stitt had 15 points on 6-9 shooting at Duke. It was his second best single game field goal percentage this year, best against an ACC team. In two games against Duke and North Carolina, Stitt has scored 26 points in 49 minutes. He has eight double figure scoring games this year.

 K.C. Rivers has scored in double figures in 17 of the 18 games so far this year. The only game he missed was against Charlotte, the school from his hometown.

 Clemson forward Raymond Sykes has made 19 of his last 22 shots from the field over an 8-game period. He was 3-3 against Duke.

 Freshman guard Terrence Oglesby has made at least two three point shots in 13 of the 18 games this year.

 Clemson and Kansas are the only tw teams in the nation ranked in the top 20 in steals and blocked shots.