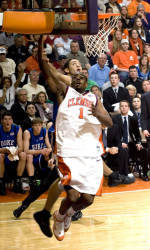 Quick Facts  Clemson will meet Boston College on just one day of rest. The Tigers have not won an ACC road game on one day of rest since January of 1986 when it won at Wake Forest, 46-43.

 Vernon Hamilton played the best all-around game of his career against Boston College as a freshman inDecember of 2003. He had 13 points, 11 rebounds and nine assists in a 72-62 Clemson win. It is the closest a Clemson guard has come to recording a triple-double.

 A victory at Boston College would give Clemson three ACC road wins in the same year for the first time since 1996-97 when Clemson had a 4-4 league record on the road. It would also clinch a winning overall record on the road for the season. The Tigers are 5-4 in overall road games entering the Boston College game this weekend. Only North Carolina has more overall road wins than Clemson among ACC schools this season.

 Clemson won the first meeting between the Tigers and the Eagles at Clemson on January 20. Cliff Hammonds shot a career best 5-6 from behind the three point line and scored 17 points. It ties for his high scoring game in an ACC contest this year.

 Hammonds had 19 assists over his last two games, his highest total in back to back games in his career. He leads the ACC in assist/turnover ratio. and needs just 30 points to reach 1000.

 K.C. Rivers made his first start of the year against Duke and had 11 points on 4-8 shooting, including 3-4 from three-point range.

 Clemson will be the opponent for Boston College’s Senior Day. Clemson is 12-34 lifetime on opponent season days, but won last year at Virginia Tech in that situation.