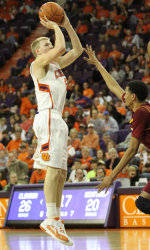 QUICK FACTS  Clemson and Wake Forest meet for the 152nd time in series history on Saturday, with the Demon Deacons holding a 98-53 advantage all-time.  The Tigers won the most recent game in the series in 2010-11 with a dominating defensive performance, holding Wake Forest to 34 percent shooting in a 63-49 win at home.  The 2011 win over the Deacons was Clemson’s first in regulation against Wake Forest since the 1997-98 season.  The Tigers broke a three-game ACC losing streak with a 64-62 win over Georgia Tech a week ago Saturday. Clemson senior Andre Young poured in a career-high 29 points, which included another career-high, seven three-point baskets.  Wake Forest comes into Saturday’s tilt with an 11-9 record, 2-4 in the ACC. The Deacons own wins over Virginia Tech and Boston College in league play, but are coming off a 75-52 defeat to Florida State at home on Wednesday.  Clemson Head Coach Brad Brownell is going for his 200th career win Saturday. He has a record of 199-106 entering the game, a .652 career winning percentage. He is 1-1 all-time against Wake Forest, having first played the Deacons when he was the coach at UNC Wilmington from 2002-06.  Young scored 15 straight points in the first half of the win over Georgia Tech, tied for the most by any Clemson player since the 1990-91 season.  Catalin Baciu earned his third start of the season against Georgia Tech and despite foul trouble in the opening half, contributed six points and three rebounds in 12 minutes.  Clemson guard Tanner Smith is the only player in the ACC averaging at least 10 points, five rebounds and four assists per game, and is vying to become the first Tiger ever to accomplish such a feat.  Smith’s nonprofit, Tanner’s Totes, will be the subject of a short feature Saturday on ESPN’s College GameDay at 11 AM.  Smith and fellow senior Bryan Narcisse will be presented undergraduate degrees prior to Saturday’s game by President Jim Barker. The two graduated in December, but were unable to attend the ceremony due to the Diamond Head Classic.  Saturday’s honorary captain is Jim Sutherland, who averaged 17.3 points per game over his three-year career and shot 85 percent at the foul line as a Tiger from 1964-67.