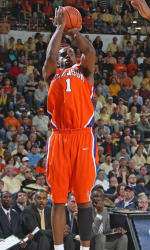 Quick Facts:  Tuesday is the final home game for Clemson seniors K.C. Rivers, Raymond Sykes and Jesse Yanutola. The seniors have a record of 90-40 and that is already the school record for wins by a senior class. The group also has a record 32 regular season ACC wins. Rivers has played in all 90 wins and is the winningest player in Clemson history overall and in ACC play.

 Trevor Booker saw his double-double streak stop at three when he had eight points and 13 rebounds in the loss at Florida State. Still, Booker is averaging 16.8 points and 10.9 rebounds and is shooting 58-97 from the field over the last nine games. Booker is now just 0.3 rebounds per game out of the ACC lead and has a 9.5 average for the season.

 Clemson has 71 wins over the last three years, just three less than Duke (74). North Carolina has the most with 91.

 K.C. Rivers has 1637 points for his career, He needs 14 to pass Dale Davis and move into sixth place in school history.

 Senior Raymond Sykes had four blocked shots at Florida State and now has 99 entering his final home game. He is eighth on the all-time Clemson list.