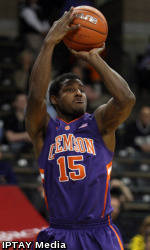 QUICK FACTS  Clemson and Virginia square off for the 119th time in the series, and for the second time in the past three weeks. Virginia leads the series 67-51, and the Cavaliers claimed a 65-61 victory in Charlottesville on Jan. 31.  The Tigers have won two straight over Virginia at Littlejohn Coliseum, by a combined 41 points.  Clemson snapped a pair of losing streaks with Saturday’s win at Wake Forest. It was Clemson’s first win in Winston-Salem since 1989-90, the first year the Deacons played in Lawrence Joel Coliseum. The win also broke Clemson’s three-game losing skid.  The Tigers lost their first four ACC road games by a combined 13 points, but then won by 20 at Wake Forest.  Virginia enters Tuesday at 19-5, 6-4 in the ACC, and has not lost consecutive games the entire season. Mike Scott, the team’s leading scorer, had 23 points in the first meeting between these two schools.  Tanner Smith is coming off his third 20-point game of the season, as he made 8-of-9 field goals at Wake Forest. All three 20-point efforts have come away from home.  Milton Jennings has averaged 14.5 points and 5.5 rebounds per game since returning from a two-game suspension.  Clemson is now 10-3 all-time in games when Bryan Narcisse has made at least one three-pointer, including 4-1 this season.  Devin Coleman matched his season point total in Saturday’s win over Wake Forest with nine points. The freshman guard made 4-of-5 shots from the field.  Six different Clemson players made a three-point goal in the win over Wake Forest. The Tigers are 3-0 this season when at least five players make a three in the same game.  An alumni game will be played on Friday, Feb. 24 as part of Clemson’s 100th anniversary celebration. Several former Tiger greats are expected to return to participate in the game. The event is set for 7:00 PM at Littlejohn Coliseum and admission is free to the public.  Tuesday’s honorary captain is Marc Campbell, who still holds the single-game three-point percentage record at Clemson after he went 7-for-7 against Maryland and Virginia in consecutive contests in 1982-83.

TICKET PROMOTIONS Clemson fans are encouraged to spend Valentine’s Day with the Tigers as the men’s basketball team will play host to Virginia at 7:00 PM on Tuesday, February 14 in Littlejohn Coliseum. Children ages 12 and under will receive free admission with a paying adult. Fans can purchase a ticket for only $5 for the February 14 game only. In addition a special Valentine’s Day date package is available and includes:

The Valentine’s Day date package and the $5 tickets are available online at ClemsonTigers.com. Those taking advantage of the free children’s ticket must either call the ticket office, order in person or order the day of the game.

The first 1,000 Clemson students through the student gate will receive a free mug and hot chocolate, as well as a free bag of popcorn.

All ticket promotions are limited and based on availability. To order please call the Clemson Athletic Ticket Office at 1-800-CLEMSON or visit ClemsonTigers.com.