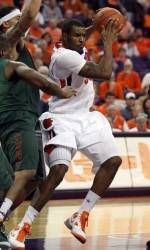 QUICK FACTS  Trevor Booker needs just four rebounds to become the third player in Clemson history to collect 1000 rebounds. The others are Tree Rollins and Dale Davis, who played a combined 34 years in the NBA.

 When Booker gets those four rebounds he will be the fifth active Division I player with 1500 points and 1000 rebounds. Already on the list are Luke Harangody of Notre Dame, Damion James of Texas, Jonathan Rodriquez of Campbell and Omar Samhan of St. Mary’s.

 Booker needs just five assists to become Clemson’s career leader in assists by a frontcourt player. He has 202 and the record is 206 by Horace Grant (1983-87). He will start his 128th straight game for Clemson on Saturday.

 Clemson has made more free throws than the opponent has attempted in each of the last two games. Clemson is 8-0 this season when that happens.

 Demontez Stitt scored 15 points in Clemson’s win over Miami last Saturday, his high point total since he scored 21 in the win over North Carolina on January 13.

 Andre Young has scored 33 points, had seven assists and six steals off the bench in the last two Clemson games. He has made 7 of his last 14 three-point shots and 8-16 overall.

 Demontez Stitt has the top plus-minus ratio on the Clemson team for the season. Clemson has outscored the opposition by 11.22 points per game when he has been on the court this year. But, in ACC play, Jerai Grant has the best plus-minus ratio with 6.0 PPG.

 A Clemson win on Saturday would give the Tigers consecutive wins over Virginia for the first time since the 2002-03 season when the Tigers swept a two game series.