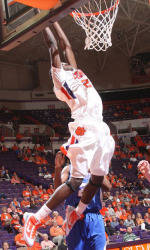 QUICK FACTS  Clemson and South Carolina will meet for the 160th time on the hardwood Sunday. The Gamecocks hold an 86-73 advantage in the series, but the Tigers have won the last five between the two schools.

 The Tigers’ five-game streak is the longest in the series since Clemson won six straight from 1994-95 through the 1999-2000 season. It has been a series of streaks. Clemson’s current five-game streak was preceded by four straight wins by South Carolina.

 Clemson knocked off a top-10 non-conference team for the first time since 1997 with a victory over Butler on Nov. 29. Demontez Stitt calmly sank a pair of free throws with 3.3 seconds left in the game, and then Trevor Booker blocked a three-point attempt with 0.5 seconds on the clock to preserve the 70-69 victory.

 The Gamecocks enter Sunday’s game with a 6-1 record. Devan Downey is once again the team’s leading scorer at 19 points per game. The Chester, SC native posted 37 points last season in the loss, but suffered eight of the Gamecocks’ 17 turnovers.

 The Tigers won last year’s game 98-87 after falling behind by as much as 11 points early in the first half. Reserve point guard Andre Young sparked the effort, posting career highs with 13 points and eight assists.

 Clemson Head Coach Oliver Purnell is now 23rd on the all-time victory list among ACC coaches. He has 123 total wins and is in his seventh year with the program. He needs just three wins to tie the late Skip Prosser (Wake Forest) for 22nd on the list.

 Trevor Booker has played well in three career meetings with South Carolina. The senior from Whitmire, SC holds averages of 12.7 points and 9.7 rebounds per game against the Gamecocks. He has made 17-of-27 field goals against South Carolina, which equates to 63 percent.

 David Potter, a senior who had never started a game prior to this season, leads the ACC in three-point field goal percentage (.594) and is tied for second in the league in three-point goals per game (2.4).

 Potter needs just four points to reach 500 for his career. The Severn, MD product is averaging 10.4 points per game this season and has started all eight contests.

 Tanner Smith has made 17 of his last 20 free throws and is now second on the team at 80 percent from the charity stripe.

 Smith ranks among the best in the ACC in terms of scoring average improvement. He currently is averaging 11.3 points per game, up 7.6 points per game from his freshman year.

 Demontez Stitt has scored in double figures three straight games, making it the first time since last February the junior has posted 10 or more points in three consecutive outings.

 Bryan Narcisse signed a letter of intent with Gamecock Head Coach Darrin Horn, when he was in charge at Western Kentucky. When Horn left for South Carolina, Narcisse was granted a release and he earned a scholarship to Clemson.