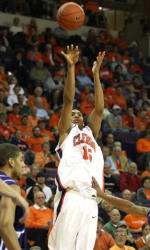 Quick Facts  Clemson has defeated South Carolina each of the last three years, including consecutive wins by at least 19 points.

 Clemson has opened with a 6-0 record. It is the third straight year Clemson has won at least its first six games. Clemson opened 17-0 last year.

 Clemson is shooting 40.3 percent on three-point shots for the first six games of the year. Starting guards K.C. Rivers and Cliff Hammonds are both shooting at least 45 percent from 3-point range.

 Sophomore David Potter has made 9-12 three-point shots so far this year. He made just seven three-point goals all of last year (in 41 attempts). His scoring average of 6.3 per game is up from 2.1 per game last year.

 Trevor Booker needs just three blocked shots to reach 100 for his career. He needs just two to go ahead of Larry Nance on the Clemson all-time list. Nance had 98 between 1977-81 before going on to become the number-one shot blocking forward in NBA history.

 South Carolina guard Branden Conrad is the son of former Clemson point guard Bobby Conrad. Conrad helped Clemson to the Elite Eight of the 1980 NCAA Tournament and is in the Clemson Athletic Hall of Fame.

 Clemson is ranked 18th in both polls this week. This is the highest ranking Clemson has had entering a game with South Carolina since the 1996-97 season when Clemson was eighth. Clemson is 5-0 in its history as a ranked team against South Carolina.

 K.C. Rivers had a double double against Purdue with 18 points and 12 rebounds. It was his second career double-double, but his second in the last 10 games.