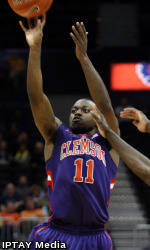 QUICK FACTS  Clemson and NC State meet for the 145th time in the series history Saturday. The Wolfpack hold a commanding lead in the series, but Clemson has had the upper hand recently, winning six of the last eight.  Saturday’s game will be the first-ever meeting between the two head coaches, Clemson’s Brad Brownell and NC State’s Mark Gottfried, who lost to the Tigers as Alabama’s head coach his last two seasons with his alma mater.  Clemson is coming off a 56-37 win over Georgia Tech in Philips Arena, its third victory in the last four seasons over the Yellow Jackets in Atlanta.  The 37 points were the fewest allowed by Clemson in an ACC regular season game. The previous low was 40 by Duke in the 1971-72 season.  Clemson has won two of its last three ACC road games, and both have come by margins of at least 19 points. The Tigers won at Wake Forest by a 20-point margin on Feb. 11.  The two teams split last season in Brownell’s first year at the helm of Tiger basketball. In the 60-50 win at Clemson, the Tigers overcame a 19-point deficit in the first half.  Milton Jennings has made 8-of-17 from three-point range following a two-game suspension, with at least one make in five straight games. He led the Tigers with 15 points in Tuesday’s win over Georgia Tech.  Tanner Smith needs 63 points to reach 1,000 for his career. If he does, he would become just the fourth player in Clemson history with at least 1,000 points, 400 rebounds and 300 assists for a career.  Andre Young is in the top 10 of seven different statistical categories in the ACC, and he and Smith are tied atop the league ranks with 1.7 steals per game.  Ninety players, coaches, managers and trainers from the past will be on hand Saturday as the Clemson men’s basketball program celebrates its 100th anniversary. The players voted to the school’s all-time team last fall will be recognized at halftime of the game.  The Mahaffey brothers will serve as honorary captains for Saturday’s game. Tom, Donnie, Randy and Richie all played at Clemson between 1959-70 and all four remain in the top 10 in school history in rebounds per game.