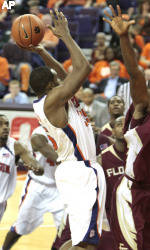  Clemson has played back to back overtime games against conference teams for the first time since the 1963-64 season when Clemson played overtime games in consecutive days against North Carolina and NC State in Feb. 1964.

 Clemson had made just 10-44 three-point shots in losses to North Carolina and Charlotte, then made 13-24 in the win over Florida State. That included a 6-6 three-point performance in the two overtime periods combined.

 Trevor Booker scored 61 points in two games last week. He scored 32 in a loss to Charlotte, the most points scored by a Clemson post player since Horace Grant had 33 against Wake Forest in 1986-87. Booker’s 61 points over the last two games are the most for a Clemson player since Edward Scott scored 61 in consecutive games against Virginia and Florida State in Feb. of 2003. Over the last four games, Booker has averaged 23.3 points per game and is shooting .679 from the field, including 4-5 on three-point shots.

 Clemson has three players in its starting lineup from the state of North Carolina. The three playes are James Mays (Garner), K.C. Rivers (Charlotte) and Demontez Stitt (Matthews).

 Mays had a double-double in the win over Florida State when he had 16 points and 11 rebounds. Eight of his rebounds were offensive. It was his first double-double since the Old Dominion game back in November, the third game of the season.

 Terrence Oglesby connected on six three-point goals in Clemson’s win over Florida State, tying a season high for the freshman. He made 4-4 three-point shots in the two overtimes combined. His 12 overtime points set a Clemson record for points in overtime in a single game.

 K.C. Rivers needs just 19 points to reach 1000 for his Clemson career. When he does he will become just the 16th junior in Clemson history to reach 1000 points.

 Edward Scott are the only players in Clemson history with over 1200 points, 400 rebounds and 400 assists. He needs only eight steals to reach 200 for his career.