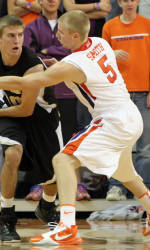 QUICK FACTS  Clemson and Michigan will meet on the hardwood Tuesday for the fourth time in the history of the series. Michigan owns a 3-0 record all-time against Clemson, with all three games decided by five points or less.  The two teams last played in the first round of the 2009 NCAA Tournament, where the Wolverines upset the No. 7 seed Tigers by a score of 62-59 in Kansas City, MO.  Brad Brownell has never faced Michigan, but he is familiar with Wolverines Head Coach John Beilein. Brownell was the top assistant at UNC Wilmington from 1994-2002 and Beilein was the head coach at Richmond from 1997-2002. Both teams were in the Colonial Athletic Association from 1997-2001, before Richmond left to join the Atlantic 10.  Clemson enters Tuesday’s game with a 5-1 overall record, 3-0 in home games. The Tigers defeated SC State by a score of 69-54 last Friday at home.  Michigan enters Tuesday’s game with a 3-2 overall record. The Wolverines lost a pair of games by 10 points or less last weekend at the Legends Classic in Atlantic City, NJ, including a three-point loss to a ranked Syracuse team.  Clemson has now won 37 of its last 39 games in the month of November dating to 2005.  Clemson holds an all-time record of 8-3 in the ACC/Big Ten Challenge, third-best among teams that have played in at least five challenges. Only Duke (11-0) and Wake Forest (8-2) have had a better record.  Demontez Stitt needs just 16 points to reach 1,000 for his career. When he does, he will become the 34th player in Clemson history to reach the milestone.  Jerai Grant scored 16 points in Clemson’s last game and has now made 66.7 percent of his field goal attempts this season and 61 percent for his career. The school record is 60.9 percent by Harold Jamison (1995-99).  Milton Jennings is coming off his first career double-double with 16 points and 10 rebounds versus SC State. Both were career-highs for the sophomore. He has more double figure games, double-doubles and free throws made through six games this season than all of last year.  Tanner Smith drew a pair of charges on SC State last time out, giving him nine through the first six games of the season.