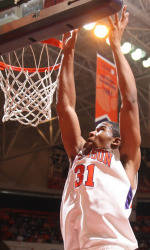 QUICK FACTS  Saturday will be reunion weekend at Clemson. Over 80 former players and coaches are expected to attend and will be introduced at halftime.

 Trevor Booker needs just 11 rebounds to become the third player in Clemson history to collect 1000 rebounds. The others are Tree Rollins and Dale Davis, who played a combined 34 years in the NBA.

 When Booker gets those 11 rebounds he will be the fifth active Division I player with 1500 points and 1000 rebounds. Already on the list are Luke Harangody of Notre Dame, Damion James of Texas, Jonathan Rodriquez of Campbell and Omar Samhan of St. Mary’s.

 Booker, who was suffering from the flu prior to the Florida State game, became the second frontcourt player in Clemson history to reach 200 assists when he had one against Florida State. He needs seven to become the Clemson all-time leader for a frontcourt player. Horace Grant had 206 between 1083-87.

 Wednesday will be Booker’s 127th consecutive start. The Clemson record is 130 in a row by Cliff Hammonds.

 Clemson made 8-20 three-point shots in the win over Florida State. It was just the second time in the last eight games that Clemson shot at least 30 percent from three-point range.

 Clemson’s defense has held the opposition to a combined 55-159 from the field over the last three games, a 346 figure.

 Three Tigers had their career high in scoring in the last game against Florida State, a rarity for a game played in mid February. Senior David Potter (19), sophomore Andre Young (19) and freshman Devin Booker (14) all had career scoring highs in the 77-67 win over Florida State.

 Potter has made 7 of his last 10 three point attempts over two games. He has scored in double figures in consecutive games for the first time since games 2-4 this season.

 Clemson got 33 points from its bench against FSU, its top scoring total off the bench since a December win over College of Charleston (48).