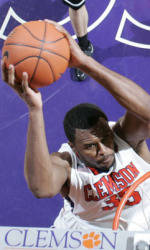 QUICK FACTS  Clemson Head Coach Oliver Purnell has 47 victories against ACC opponents in his seven years at Clemson. One more will move him into second place in Clemson history. He is currently tied with former Tigers coach Bill Foster (1975-84). Cliff Ellis holds the record with 59 ACC wins in his 10 years in charge of the program.

 Trevor Booker has averaged 20 points a game over his last six games and has shot 62 percent from the field (52-84). Booker is now 8th in Clemson history in scoring, fourth in rebounding, fourth in blocked shots and sixth in field goal percentage.

 Two of the top three active scorers in the ACC will be on display on Sunday when Clemson meets Maryland. Greivis Vasquez of Maryland has the most among active ACC players with 1863, while Clemson’s Trevor Booker is third with 1576.

 Clemson had its sixth home sell out for the Duke game on January 23 and Sunday’s game with Maryland is sold out as well. Clemson has just five home games left and all five are sold out. Clemson will finish the year with 11 sell outs, most for the program since the 1997-98 season.

 Clemson hopes to have Demontez Stitt back in the lineup Sunday. He missed the game at Boston College with a sprained ankle, ending a streak of 52 straight starts. He scored 15 in Clemson’s win over Maryland last year.

 Clemson has beaten Maryland six of the last eight meetings, including last year by 29 points, the largest victory margin in Clemson history against the Terps. Five of the last six Clemson victories over Maryland, the Tigers were coming off a loss. Clemson has lost 3 in a row entering Sunday’s game.