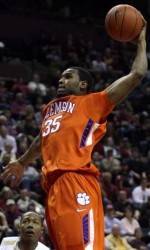  If Clemson can reach the NCAA Tournament this year it would give the Tigers three straight years in the event, tying the school record for consecutive NCAA appearances. Clemson also had three in a row under Rick Barnes from 1996-98.

 A victory over Georgia Tech on Tuesday would give Clemson nine ACC wins and a third straight winning season in league play. Clemson has never had three consecutive winning ACC seasons.

 Clemson has 29 wins over Georgia Tech in Littlejohn Coliseum, more than any other school.

 There are seven ACC teams at 7-7 or better in the ACC entering the final week of the regular season. Clemson has to play the other six teams on their homecourt this year, the only top seven team who has to do that. By comparison, Duke and Virginia Tech have just three road games against the top seven teams in the league.

 Over the last four years, Clemson has a 92-38 record, a .708 winning percentage. Clemson ranks third among ACC schools in winning %.