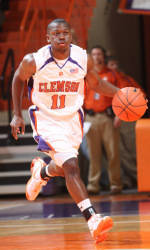 Quick Facts  Clemson has won four of the last six meetings with Georgia Tech. The two teams have split two meetings each of the last two years with each team winning on its home court. The home team has won 34 of the last 44 meetings in the series.

 Georgia Tech enters Sunday’s game with an 0-5 league record, but three of the five losses have been in overtime.

 Junior forward Trevor Booker went over the 1000 point mark when he scored nine against Wake Forest last Saturday. He now has 1011 career points. He is the 16th Clemson player in history to reach 1000 points during his junior year.

 Booker leads the ACC in field goal percentage and blocked shots and is fourth in rebounding.

 K.C. Rivers can become the winningest player in Clemson history with a win over Georgia Tech. He has played in 84 wins, the same total as Cliff Hammonds (2004-08) and Elden Campbell (1986-90). Rivers needs just 12 points to reach 1500 for his career. He will become the ninth player in Clemson history to reach 1500 points, the first to reach that mark since Terrell McIntyre, who was a senior in 1998-99 and finished with 1839.

 Clemson sophomore Jerai Grant has 29 blocked shots in 272 minutes this year, a blocked shot every 9.38 minutes. That is on pace to be the seventh best blocked shots per minute figure in Clemson history. He is fifth in the ACC in blocked shots.

 K.C. Rivers, Tanner Smith and Andre Young all have more steals than turnovers this year.

 Freshman Andre Young has a 26/3 assist/turnover ratio in 10 home games this year.

 Trevor Booker is shooting 62.1 percent from the field at home this year and averages a team best 16.7 points per game.

 Clemson is ranked 10th in the latest RPI and has a schedule ranking of #27 in the nation.