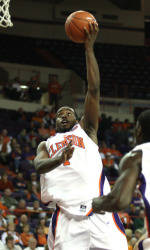  Clemson has won each of its last 22 opening games. The last time Clemson did not win the season opener was in 1984-85 when Clemson lost to Tennessee Tech in Cliff Ellis’s first game as head coach. Ellis went on to become Clemson’s winningest coach.

 Oliver Purnell is 4-0 in season openers at Clemson with an average victory margin of 35.75 points per game. He has won nine straight season openers as a Division I head coach.

 Clemson has won 25 consecutive games against Furman, including 17 in a row at Littlejohn Coliseum. Furman’s last win over the Tigers took place in 1977-78 at Clemson.

 Clemson forward James Mays was named to the Playboy All-American preseason team. He is the first Tiger in history to be named to that team.

 Cliff Hammonds has been named the captain of the Clemson team. He is the first single captain of a Clemson team since Chris Hobbs in 2003-04. In October, Hammonds was inducted into the Blue Key honor society at Clemson.

 Clemson has an 18-1 record in the month of November under Oliver Purnell and has won 13 games in a row. Clemson is 81-15 all-time in November.

 Demontez Stitt is slated to start the game at point guard for the Tigers. He will be the 17th first-year freshman to start the opening game for the Tigers since freshman eligibility returned to college basketball in 1972-73. He will be the sixth point guard in school history and the fourth player under Oliver Purnell to start the opening game as freshman. Cliff Hammonds and Trevor Booker all started the first game of the season under Purnell.

 Clemson was picked 12th in the preseason college basketball poll by Basketball Times. The Tigers were also ranked 22nd by Street & Smith. The Tigers are 29th in poll points by USA Today and 30th by Associated Press. Clemson was picked to finish fourth in the ACC by the official ACC preseason poll done by the ACC Sports Media Association. That is Clemson’s highest preseason selection since a third- place projection prior to the 1997-98 season, Rick Barnes final year at Clemson.

 Clemson won its exhibition game against Augusta State on November 6 by a 79-66 score. James Mays and Demontez Still added 14 apiece.