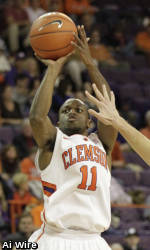 QUICK FACTS  Clemson and College of Charleston will meet for the third straight season on Saturday. The Tigers downed the Cougars at home two years ago, 94-55, before traveling to Charleston and returning with a come-from-behind 66-59 win.  The Tigers are 2-0 on the young season and are coming off a 73-50 road victory over The Citadel on Wednesday, Nov. 16. Clemson has held both of its first two opponents to 31 percent shooting or less.  The Cougars enter the game with a 2-0 record, most recently defeating Morehead State in the ESPN 24-hour marathon on Tuesday, Nov. 15.  Clemson Head Coach Brad Brownell and Charleston assistant Mark Byington have ties. Byington was a three-year starter at UNC Wilmington from 1994-98, when Brownell was an assistant coach at the school under Jerry Wainwright.  Through two games, Clemson has held the opposition to 47 points per game and a .306 field goal percentage. Both figures are No. 2 in the Atlantic Coast Conference.  All 12 players on the Clemson roster appeared in the game against The Citadel, and 11 of them scored a point.  Tanner Smith, a guard, has led Clemson in rebounding in each of the first two games and is averaging 10.5 per outing.  The Tigers blocked 11 shots against The Citadel, a program-high under Brownell’s watch. Reserve forward Bryan Narcisse was responsible for three of the blocks.  Andre Young has made at least one three-point goal in 36 of his last 37 games.  Freshman guard T.J. Sapp has started both games and played 56 minutes this season with just one turnover. Sapp leads all Tiger freshmen in scoring at 9.5 points per game.  Milton Jennings posted the same number of points (10), rebounds (4) and blocks (2) against both of Clemson’s first two opponents, Gardner-Webb and The Citadel.  Reserve center Catalin Baciu recorded career highs Wednesday at The Citadel in points scored (9), field goals (4), field goal attempts (10) and minutes played (15).  College of Charleston freshman Anthony Stitt is a cousin of former Tiger great Demontez Stitt, who led Clemson to four NCAA Tournament appearances from 2007-11. Anthony Stitt has played 44 minutes through two games for the Cougars.