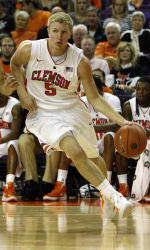 QUICK FACTS  Clemson and Coastal Carolina meet Tuesday for the first time since the 2002-03 season. It will be the sixth meeting in history between the two schools on the hardwood, with Clemson holding a 5-0 advantage.  Tuesday’s game will feature the return of former Clemson coach Cliff Ellis to the opposing sideline for the first time since he left the school in 1994. He was Clemson’s head coach from 1984-94, guiding the Tigers to 177 wins and the 1990 ACC regular season championship.  This will be the first time in history a former Clemson coach has returned to Littlejohn Coliseum to compete against the Tigers with another team.  Prior to Tuesday’s game following the national anthem, Ellis will be presented a plaque commemorating his achievements as Clemson’s basketball coach.  The Tigers are coming off a loss to College of Charleston, Clemson’s first home loss against a Southern Conference team since Elon won at Littlejohn Coliseum in 2005-06.  The Chanticleers enter Tuesday’s game with a 4-0 record, which includes a 71-63 win at home last week over LSU. Coastal Carolina has a 54.3 percent field goal accuracy through the early part of the 2011-12 season.  The Tigers did not commit a turnover in the second half of the game against College of Charleston, the first time Clemson has gone without a turnover in a half since the second half of an ACC Tournament game against Wake Forest in 1996.  Devin Booker matched his career-high in scoring with 16 points and established career bests in rebounds (14), offensive rebounds (7) and minutes (37) against the Cougars.  Tanner Smith will play in his 100th game for the Tigers on Tuesday. He is coming off a 15-point effort against College of Charleston.  Andre Young tied a career-high with nine assists against College of Charleston. He is second in the ACC this season with a 5-to-1 assist-to-turnover ratio.  Young recently passed Elden Campbell for 15th on Clemson’s all-time steals list with 137 in his career. He needs 15 steals to advance into the top 10.  Milton Jennings is Clemson’s only player to reach double figures in the scoring column in every game so far this season.

GAME PROMOTIONS Tuesday’s game against Coastal Carolina will be Faculty and Staff Night at Littlejohn Coliseum. All Clemson faculty and staff with a valid university ID card will receive free admission to the game and a voucher for a free popcorn and Coke from the concession stands. Additional tickets may be purchased for family members for the discounted price of $10. Faculty and staff can get their tickets and vouchers at the East Gate box office at Littlejohn Coliseum starting at 8 p.m. Tuesday.