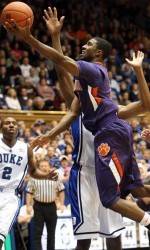 QUICK FACTS  Trevor Booker was named one of 30 semifinalists for the John Wooden Award earlier this week. Booker is one of five ACC players on the list.

 Clemson has won three in a row over Boston College, one at Clemson, one at BC and one at neutral site in the ACC Tournament (2008).

 This is the first time Clemson has played Boston College twice in the regular season since 2006-07. The two teams did meet twice in 2007-08, but one of the games was in the ACC Tournament. Clemson is 3-0 all-time vs. the Eagles in games at Littlejohn Coliseum.

 Despite its loss to Duke last Sunday, Clemson remained in the USA Today top 25 this week with a number-21 ranking. The Tigers are 26th in poll points in the AP poll. Clemson has been ranked in every USA Today poll so far this season.

 Trevor Booker needs just 8 points to go into 11th place ahead of Tree Rollins on the Clemson all-time scoring list. Booker has 28 career double-doubles, most among active ACC players.

 Freshman Devin Booker has made 21 of his last 32 shots from the field over the last six games and has scored 46 points in those contests.

 Booker has 922 career rebounds, more than any other active ACC player. He needs 16 to move into fourth place ahead of Harold Jamison on the all-time Clemson list.

 Over the three games prior to the Duke game, Clemson shot 93-164 from the field, a .567 figure. Clemson then shot 5-30 from the field in the first half against Duke and scored just 12 points. But the Tigers responded with 41 points and a 58 percent shooting performance in the second half at Cameron Indoor Stadium.

 Stitt has scored in double figures in four straight games and in nine of his last 11. He has made12 of his last 13 free throws.

 Jerai Grant has made 14 of his last 18 field goal attempts. He scored 11 points at Duke, his high game in an ACC road game for the Tigers.

 Saturday is the 30-year anniversary of Clemson’s 87-82 overtime victory against #1 ranked Duke. That Jan. 9, 1980 win was Clemson’s first win over the number-one ranked team in history.