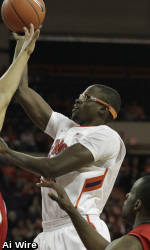 QUICK FACTS  Clemson and Virginia Tech have played 24 times, with the Hokies holding a 13-11 edge in the series. The teams have split the past two meetings since Brad Brownell took over as Clemson’s coach. Virginia Tech won earlier this season in Blacksburg, 67-65.  Thursday’s game will be the sixth on either Clemson or Virginia Tech’s Senior Night since the Hokies joined the league in 2004-05. Clemson has won all five meetings in that scenario.  Clemson has won over 70 percent of its home Senior Night games over its history, including each of its last seven games.  The Tigers’ 2012 senior class has advanced to three NCAA Tournaments, won 81 games, and produced Clemson graduates in Bryan Narcisse and Tanner Smith. The other two seniors, Catalin Baciu and Andre Young, are on pace to earn their degrees in May.  Clemson has won four of its past five ACC games to even its conference record at 7-7. It is the first time the Tigers have been .500 in ACC play since moving to 3-3 after a win over Wake Forest on Jan. 28.  Senior leaders Tanner Smith and Andre Young led the Tigers to an overtime win over NC State in Clemson’s last game. Smith’s two free throws with 4.1 seconds left in regulation sent the game to overtime, and Young hit a pair of threes in the final 75 seconds to lift the Tigers to the 72-69 win.  Smith has led the Tigers in assists in each of the last six games and in 19 of the 28 games this season (68 percent of games).  Young was 0-for-5 from three-point range last Saturday against NC State before burying his final two to erase a three-point deficit in overtime.  Senior forward Bryan Narcisse will play in his 100th career game Thursday.  Milton Jennings has made at least one three in six straight games, shooting 45 percent from long range in that stretch.  Freshman guard T.J. Sapp scored seven points Saturday against NC State, which equaled his total over the nine games prior to the win over the Wolfpack.  Thursday’s honorary captain will be Ricky Jones, a member of the 1989-90 regular season ACC championship team. Jones played in Clemson’s first-ever alumni game last weekend.