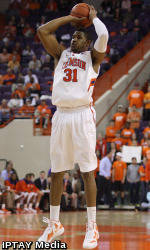 QUICK FACTS  Clemson and Wake Forest meet for the 153rd time on the hardwood Saturday, with the Demon Deacons holding a 98-54 edge in the series. The Tigers have won the last two meetings against Wake Forest.  The Tigers won at Littlejohn Coliseum two weeks ago over the Demon Deacons, 71-60. Senior guard Andre Young had a team-high 19 points, while graduate forward Bryan Narcisse had a career-high 11.  Saturday’s meeting will be between two teams trying to stop losing streaks. The Tigers have lost three straight, while the Deacons have dropped five in a row entering Saturday.  Clemson is fourth in the ACC in assists per game (12.7), despite being ninth out of 12 teams in scoring offense (64.8).  The Tigers are atop the ACC in turnover margin with a +2.3 figure overall, +4.6 in conference play. Clemson averages only 12.1 turnovers per game, second-best in the conference.  The Tiger program is in search of its first win in Lawrence-Joel Coliseum since the Tigers won 89-75 in 1989-90, the facility’s inaugural season.  Andre Young leads the ACC with 1.9 steals per game and is second in assist-to-turnover ratio (3.0), third in free throw accuracy (.861), fourth in three-point goals per game (2.3), and seventh in assists per game (3.4).  Milton Jennings returned from a two-game suspension to provide 14 points off the bench, 11 in the second half alone of Clemson’s most recent game against Maryland. Jennings matched his career-high by going 3-of-4 from three.  Devin Booker has recorded two consecutive double-doubles and has averaged 12.1 points and 7.7 rebounds per game over the Tigers’ last seven contests.  Booker leads the Tigers this season with 23 blocked shots, four more than he had total during his first two seasons combined at Clemson.  Reserve center Catalin Baciu has scored six or more points in five of Clemson’s last six games, with a high of 10 at Miami.  Tanner Smith is the ACC’s only player averaging at least 10 points, five rebounds and four assists per game. He has led or tied for the team lead in assists in 14 of the 23 games this season. Smith is coming off a five-assist performance against Maryland with zero turnovers in 35 minutes.