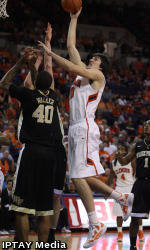 QUICK FACTS  Clemson and Virginia Tech meet for the 24th time on the hardwood Saturday, with the Hokies holding a 12-11 lead in what has been an extremely competitive series. Clemson won the most recent game on the Tigers’ Senior Day last season, but the Hokies won the two games prior to that.  Clemson enters Saturday’s tilt with an 11-10 record. Eight of Clemson’s losses have come by seven points or less, including all four against ACC foes.  Both teams have been on the losing end of several close games this season. In their combined 20 losses, 12 have been by margins of five points or less.  Virginia Tech lost on Thursday night to a top-10 Duke team, 75-60, at Cassell Coliseum. The Hokies enter with one ACC win, which came at Virginia on Jan. 22.  Tanner Smith and Andre Young combined to play 67 minutes at Virginia without a turnover. Young is second and Smith is sixth in the ACC in assist-to-turnover ratio this season.  The Tigers committed just four turnovers at Virginia on Tuesday, the program’s low figure under Brad Brownell and second fewest in school history.  Devin Booker has scored 16 points in back-to-back games, the most points he has scored in consecutive ACC contests in his career. He is shooting 50 percent from the field and 75 percent at the free throw line in ACC play.  Reserve center Catalin Baciu is shooting 64 percent from the field through seven conference games.  Smith was named to the Capital One Academic All-District Team on Thursday, making him the only three-time honoree in Clemson men’s basketball history.  Smith is shooting 43.8 percent from three-point range in conference games, by far the best figure on the team and one of the top percentages in the ACC.  Young is on pace to finish his career with more steals than turnovers, a rare accomplishment in Clemson history. Only Sean Tyson and K.C. Rivers have done it prior to Young.  Sharone Wright has been named Clemson’s legend representative for the 2012 ACC Tournament at Philips Arena in Atlanta. Wright is still sixth in ACC history in career blocks and was named to the Tigers’ all-time team last fall as part of the 100th anniversary celebration.