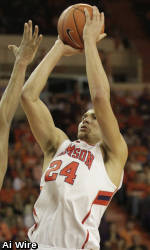 QUICK FACTS  Clemson and Virginia Tech face off for the first time ever in the ACC Tournament. The Tigers and Hokies have played 12 times since Tech joined the league in 2004-05, and 10 of the games have been decided by five points or less.  Both of this year’s games between the two schools were decided by exactly two points, a 67-65 win for Virginia Tech in Blacksburg and a 58-56 win for Clemson at home on Senior Night on March 1.  Clemson’s Brad Brownell has done well in conference tournaments as a head coach. He has compiled a 16-6 record at UNC Wilmington, Wright State and now Clemson. He took the Tigers to the ACC Tournament semifinals his first season.  Clemson has a record of 45-35 over the past five ACC regular seasons, the fourth-best winning percentage (.563) among league schools during that time.  Andre Young was named to the All-ACC Defensive Team by the media on Monday. He led the ACC with 1.7 steals per game during the regular season.  Tanner Smith was named to the ACC’s Fan’s Guide All-Defensive Team, a unit selected by the league’s head coaches.  Smith suffered a head injury after a hard fall to the floor in the second half of the Florida State game on March 4, and is listed as questionable as of Tuesday.  Smith needs just 26 points to reach 1,000 for his career.  Devin Booker posted his fifth double-double of the season in Sunday’s loss at Florida State and has led or tied for the team lead in rebounding in 11 of the last 14 games.  Freshmen K.J. McDaniels combined for 25 points in Clemson’s most recent game, at Florida State. McDaniels posted a season-high 16, while Coleman scored all nine of his points in the second half.  Coleman scored just two points in 14 non-conference games, but scored 40 while playing in 13 ACC regular season games.  Six Clemson players have experience in the ACC Tournament. Milton Jennings owns the top scoring average at 8.7 points per game among the six players with tournament experience.  Former Tiger center Sharone Wright, a member of the school’s all-time team, will be Clemson’s ACC legend for the tournament this week. He will be honored with the other school legends during the semifinals Saturday.