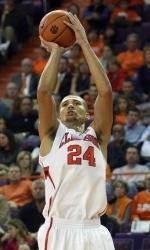 Clemson vs. The Citadel Game Notes

QUICK FACTS  Clemson opened year two of the Brad Brownell era with a 65-44 win over Gardner-Webb on November 11. The Tigers used a stifling defense to break a 29-29 tie at the half. Clemson held Gardner-Webb to 31 percent shooting from the field.  The Citadel enter Wednesday’s game at 1-1 after splitting two games at the All-Military Classic in Colorado Springs, CO. The Bulldogs lost to VMI on Friday by a score of 103-100, but rebounded with an 83-72 win over Army on Saturday.  Wednesday’s game will be the 82nd in the series between the two schools. Clemson holds a 59-22 advantage and has won 13 straight over The Citadel.  This will be Clemson’s first game played at The Citadel since the 1989-90 season. The Tigers have played in the city of Charleston two of the last three years.  Clemson won last season at Littlejohn Coliseum, 69-54. Jerai Grant had 13 points and blocked seven shots in the Tiger win.  Clemson assistant Earl Grant began his Division I coaching career at The Citadel, where he was an assistant coach from 2002-04.  Andre Young led the Tigers in scoring in the season-opener against Gardner-Webb. He poured in 19 points and made three from long range, giving him 173 for his career.  Young has made at least one three-point goal in 35 of his last 36 games. He will play in his 100th career game Wednesday.  Tanner Smith grabbed a career-high 14 rebounds in the opener against Gardner-Webb. He was just two assists shy of a rare double-double without points. Smith added six points and matched a career-high with five steals.  Smith’s 14 rebounds were the most by a Tiger guard since K.C. Rivers had the same total against East Tennessee State in a postseason NIT game in 2007.  T.J. Sapp played 30 minutes in the opener, the most by any Tiger player in his first game since Chris Whitney’s 31 against Morehead State in 1991. Whitney was a junior college transfer. The last time a Clemson freshman played at least 30 minutes in his first game was Dale Davis (30) against Oregon State in 1987-88.  Wednesday’s game will be a Homecoming for Palmetto State native Milton Jennings, who grew up in nearby Summerville. He had a double-double last year against The Citadel.