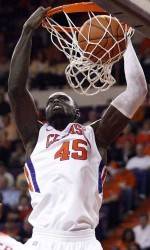 QUICK FACTS  Clemson and South Carolina will meet on the hardwood Sunday for the 161st time in the history of the rivalry. The Gamecocks hold an 86-74 series advantage, but the Tigers have won the past six meetings.  Clemson’s current six-game winning streak against South Carolina is its longest since the Tigers also won six straight over the Gamecocks from 1994-99.  The Tigers have won the last three games by exactly 11 points apiece, including 72-61 last season at home.  Clemson is looking for its fourth consecutive win in Columbia, something the Tigers have done only one other time in the history of the rivalry. The Tigers won four straight at South Carolina between 1992-98.  The Tigers have won a school-record 12 consecutive road games against non-conference foes, a total that includes the last two wins in Columbia over the Gamecocks. The streak dates to the 2006 postseason, when Clemson fell at Louisville.  Clemson has won seven of the last nine meetings between the two schools in Columbia.  The Tigers are third in the ACC in scoring defense (61.6 points per game) and fifth in three-point percentage defense (.306).  Andre Young is tied for third in the ACC in three-point goals per game (2.4) and fourth in accuracy (.459) this season. He also is tied for fourth in assist-to-turnover ratio (2.0).  Young has made at least one three-point goal in every game this season and in 23 of Clemson’s last 24 games overall.  Demontez Stitt needs just five points Sunday to reach 1,000 for his career. When he does, he will become the 34th player in school history to register 1,000 career points.  Jerai Grant needs just eight field goals to reach 200 for his career and 12 offensive rebounds to reach the same total. When he reaches 200 made field goals, he will qualify for the career list in terms of field goal percentage. He would rank second in school history behind Harold Jamison with a 60.4 percent accuracy if he had enough made field goals.  Reserve forward Bryan Narcisse actually signed his letter of intent to play for South Carolina Head Coach Darrin Horn when he was in charge of the Western Kentucky program. When Horn left to coach South Carolina in 2008, Narcisse was released from his NLI and signed with Clemson.