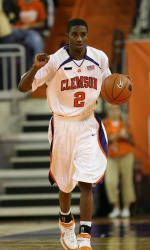 Game Notes  Clemson won its 23rd consecutive season opener with a 91-46 victory over Furman on November 12. It was Clemson’s largest victory margin in a season opener since a 114-69 win over Morehead State in 1991-92.

 Clemson tied a school record with 25 steals in the win over Furman. Clemson had 25 in its season opening win over Hampton in 2004-05, Oliver Purnell’s second season at Clemson. James Mays led Clemson with six steals, the most steals by a Clemson frontcourt player since Iker Iturbe had six against NC State on March 1, 1995.

 Oliver Purnell’s is now 5-0 in season openers at Clemson with an average victory margin of 37.6

 Clemson forward James Mays got his senior season off to a good start with 17 points, six rebounds and six steals against Furman in just 20 minutes of play. It was his career high in steals and tied a Clemson record for steals in a game by a frontcourt player.

 Clemson was 18-1 last year against non-conference teams, and is 1-0 this year.

 Clemson has a 19-1 record in the month of November under Oliver Purnell’s and has won 14 games in a row. Clemson is 82-15 all-time in November.

 Mississippi State center Brian Johnson played against Clemson for Louisville in the 2006 NIT. He had a still career high 13 points and 13 rebounds against the Tigers in that game.

 Clemson was picked 12th in the preseason college basketball poll by Basketball Times. The Tigers were also ranked 22nd by Street & Smith. The Tigers are 26th in poll points by USA Today and 27th by Associated Press this week.