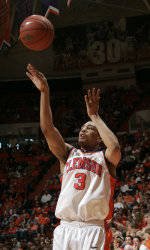  Hamilton enters his Senior Night game first in Clemson history in steals (253) and eighth on the all-time ACC list. He is fifth in scoring among Tiger point guards, sixth in assists and ninth in playing time. He leads the team in scoring in ACC games (13.7) and scoring in road games (15.2) in 2006-07.

 Clemson has lost nine of its last 11 games, but six of the nine losses have been by five points or less.

 Clemson’s ACC opponents are 95-91 when not playing Clemson this year, the third most difficult conference school in the ACC. Only NC State and Miami have played a tougher league slate.

 This will be the first meeting this year between Clemson and Miami (FL). Miami (FL) has beaten the Tigers five consecutive meetings, including a 4- 0 record since the Hurricanes joined the league for the 2004-05 season. Miami (FL) and Duke are the only ACC teams Clemson has not defeated since Oliver Purnell became head coach in 2003-04.

 Cliff Hammonds needs 23 points to reach the 1,000 point mark in his career. When he does he will become just the 15th player in Clemson history to reach 1,000 points before the end of his junior year. When he does, he will join Vernon Hamilton as starting guards with at least 1,000 points. Clemson has had a pair of 1,000-point starting guards on the same team just once previously, the 1997-98 season when Greg Buckner and Terrell McIntrye both had at least 1,000 career points at the same time.

 Clemson freshman center Trevor Booker is shooting 60.3 percent from the field this season. He is just short of the Clemson freshman record of 60.6 by Sharrod Ford in 2001-02. Booker has made 30 of his last 44 shots from the field. His 61 blocks rank fourth in Clemson history among freshmen. He needs just three blocks to move into second place among Tiger freshmen. Tree Rollins had 106 in 1973-74, his freshman season.

 Cliff Hammonds has an ACC best 2.95 assist/trnover ratio. He is challenging Grayson Marshall’s single season record of 2.99 set in 1986-87.

 Junior walk-on Matt Morris scored eight points in nine minutes at Boston College. He had played just 10 minutes in ACC play prior to that game.