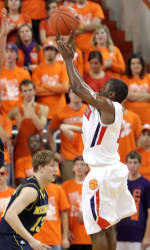 QUICK FACTS  Clemson and Florida State have had a competitive history on the hardwood, with the Seminoles holding a slight 29-26 edge in the series.  The Tigers won both meetings last season, and guard Andre Young was a major factor in both games. In the home win, Young set his career high with 19 points. He hit a shot from half court just before halftime to seize momentum after the Tigers fell behind by 13 in the game at Tallahassee, and then the go-ahead three-pointer in the final 30 seconds of Clemson’s 53-50 win.  Sunday’s game features the top two scoring defenses in the ACC. The Seminoles lead the ACC and are 15th in the NCAA in scoring defense, allowing only 56.6 points per game. Clemson is 61st nationally at 61.9 points per game.  The Seminoles lead the NCAA in two defensive categories, blocks per game (8.3) and field goal percentage defense (.316).  Clemson has won five ACC openers in the month of December in its history. The Tigers won their last December league opener in 2008 at Miami by a score of 91-72 behind a combined 45 points from K.C. Rivers and Terrence Oglesby.  Young ranks among the top 10 players in the ACC in three-point percentage (third – .442), steals per game (fourth – 1.8) and three-point goals per game (sixth – 2.4).  Young needs just two steals to reach 100 for his career and has made at least one three-point goal in nine straight games, including all eight so far this season.  Demontez Stitt surpassed 1,000 career points the last time out against South Carolina. He has 1,008 points in his career and has posted double figures in seven consecutive games.  Jerai Grant has averaged 9.0 rebounds per game over Clemson’s last three contests, including an average of 4.3 on the offensive boards. He needs eight offensive rebounds to reach 200 for his career.  Tanner Smith has taken at least one charge in six consecutive games and now has 12 on the season, by far the team leader in that category.  Milton Jennings has improved his scoring average from last season by 6.1 points per game, and improved his rebounding average by 2.1 rebounds per game. He is also shooting 10 percentage points higher this season at the free throw line.